According to a relatively recent change in the Companies Act in India, large companies must now allocate two per cent of their net profits to Corporate Social Responsibility (CSR ) activities. This is meant to act as a stick approach to drive better corporate responsibility amongst corporates, integrate sustainability and thinking about  wider stakeholders in their businesses.

So, intermediary organisations that can assist corporates in spending that money, assessing how well it is being spent, are on the rise in India. They often employ networks of agents on the ground to record data and ensure that schemes are being implemented and tracked at the local level. One suchorganization, the Federation of Indian Chambers of Commerce and Industry’s Socio-Economic Development Foundation (FICCI-SEDF), does just that, working with partners to design projects, validate them and assist in grassroots capacity building.

It’s a sector that is growing fast, with a number of Non Governmental Organization-focused groups incorporating a technology element to their on-the-ground work.

But there is one component missing. Many of these intermediaries, and the corporates themselves, are focused on their projects within India. Manyinternational donors, particularly diaspora and global charities, don’t have access to this detailed data that is produced. Given that organizations like FICCI, India’s apex trade body, are working with corporates and projects across the country, sharing data on these may attract further international interest in the projects. International donors often look for quality assurance and evidence on the ground that projects and donations are working – data that intermediaries have at their fingertips. 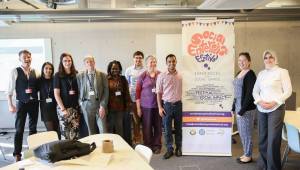 A first-of-its-kind rating tool for charities based in the UK is changing that for Indian and other South Asian charities.  Charity Clarity (ACC) has been growing steadily over the last few months in London. CC has two objectives. First, empowering donors with the right information to help them make a difference.  Second, supporting charities highlight their good work and supporting them to help them succeed.

CC is working in partnership with a number of Indian intermediaries, including India’s first venture capital funded CSR consultancy that has an IT platform compatible with the lates rules to bring data about the South Asian charities to a global market. A donor sitting in London or New York will be able to compare charities according to the sectors and criteria they have in, say, the state of Bihar in India, and see which the best one to donate to is.

This process is through assessing charities across 18 categories with 80 questions the team asks of a charity as part of their due diligence, which include questions on whether their mission is clear, whether their activities align well to their mission, and whether outcomes and impact are measurable and evident.

Donors will be able to see statistics around how well women are represented on boards, whether charities are serial offenders in filing their accounts on time, how efficient the charities are at using meagre resources, which have the best trading revenue, and whether their activities align well to their stated mission. All the things that are essential for good corporate governance in the corporate sector, bringing those tools and skills into the NGO sector.

Lord Dolar Popat, a British Asian businessman and Conservative government Whip until 2015, said: ‘The question we too rarely ask ourselves is ‘do we know where that money goes? How easy is it to access properly audited accounts, and what assurances can an organisation provide?’ He added that CC represents ‘an obvious evolution’ in how charity governance is done.

Some charities are already seeing the benefits. Leah Sha Pattinson, founder ofWomen In Need based in Nagpur, a charity providing free medical, and socio- economic support to women in India, said: ‘The assessment by  Charity Clarity  highlighted our strengths and weaknesses. Since CC’s assessment WIN is in the process of developing a training and marketing project to provide women with employment, as well as generating income for our core activities.’

Tanya Braun, from Indian education charity Pratham, said: ‘It’s lovely to see the work we do for improving education quality in India recognised in this way.’

CC aims to list several thousand charities on its rating engine by the end of 2015. It has been investing heavily in its technology platform over the last few months to ensure the data provided is up-to-date and market-leading. As part of this initiative there are discussions around bringing an annual delegation of India’s leading NGOs to Europe, and in particular London, to learn from leaders in the social enterprise and NGO space in order to build capacity for South Asia’s NGO leaders.

The reason why CC came about is because of surveys by New Philanthropy Capital (NPC): their survey with researchers Ipsos MORI found 20% of people said they have little trust in charities. But it was clear that the more people know charities, the more they tend to trust them – 69% of those knew ‘A great deal’ or ‘a fair amount’ about charities had high or medium trust in them.

Therefore, as CC gives greater information in the hands of donors, the hope is that it will help generate greater trust in charities, and therefore greater donations and social impact. That can only be good for society.

This article is reproduced from Rani Singh’s original for Forbes here,